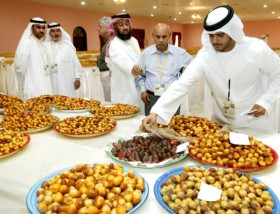 ABU DHABI, June 28th, 2009: The Liwa Date Festival is to commemorate the centenary of Sheikh Zayed the Great, according to the festival’s organizing committee.

“The aim of this commemoration is to make sure that people are aware of the achievements of the late Sheikh Zayed the Great, a man with a historic legacy,” said Obaid Khalfan Al Mazrouei, Director of the Festival.

“We think that this awareness of the heritage of our forefathers can contribute dramatically to the knowledge and appreciations in our generation and the generations to come, in Abu Dhabi and the whole UAE,” added Mazrouei.

“Sheikh Zayed the Great is a beacon to future generations. He was a man with a charisma, a leading figure of his time, and a distinguished ruler and leader with an edge among his compatriots. He was renowned for his wisdom, justice, and the ability to convince others as well as his toughness in facing dangers without hesitation,” he emphasized.

Sheikh Zayed the Great faced many local and regional challenges which he managed to overcome. He was able to sustain his Emirate sovereignty despite the dominant presence of the British forces in the Arab Gulf which lasted over three centuries. He was instrumental in affirming the role of Abu Dhabi in the region, safeguarding it from any foreign aggression.

“Sheikh Zayed the Great worked to guarantee the stability of his country and the prosperity of his people. The civil aspects of his rule were present in the urban development he employed, despite being a real Bedouin in his heart. He managed to combine the two in a noticeable harmony,” said Mazrouei.

“Sheikh Zayed was a man with many friends and had his strength from those friendships and tribal relations. And in the zenith of his power, he never forgot the poor and the needy,” he added.

The Liwa Date Festival is held under the patronage of HH Sheikh Mansour bin Zayed Al Nahyan Deputy Prime Minister and Minister of Presidential Affairs. The Festival is organized by the Abu Dhabi Authority for Culture and Heritage and held in its fifth edition in Liwa, the Western Region, Abu Dhabi, between 17th and 26th of July 2009.

Full day trip to the far off Liwa desert. A unique tour that will get you to the depth of the desert 100s of kilometers far from civilization. Enjoy desert drive and nature in the desert near Liwa Oasis.