Amazon CEO Mr. Jeff Bezos In a statement on Thursday apologized for removing copies of e-books from customers’ Kindle last week, a move from Amazon that angered consumers and forced Amazon to defend what appeared to be arbitrary and controlling behavior. 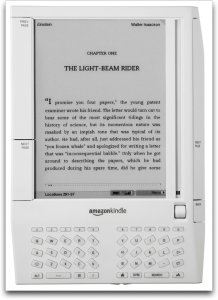 Amazon’s targets were the books Animal Farm and 1984 by George Orwell, two novels about the horrors of repressive societies.

The company deleted the books both from customers’ Kindles and the Kindle store, where they’d been sold. An Amazon spokesman said the books had been added to the store by a company that didn’t have rights to them and were unauthorized copies.

The irony of Amazon came, when AMazon remotely deleted novels about repression. Although the customers were offered refunds, several were upset for it. “Its  like when Barnes & Noble clerk coming to my house when I’m not home, taking a book I bought from them from my bookshelf and leaving cash in its place,” one customer wrote on Amazon’s Web site. “It’s a violation of my property and this is a perfect example of why people (rightly) hate DRM.”

On Thursday, as Amazon reported quarterly revenue that missed Wall Street’s expectations and suffered a drop in share price of nearly 7%, Bezos was contrite.

“This is an apology for the way we previously handled illegally sold copies of 1984 and other novels on Kindle,” he wrote on Amazon’s site. “Our ‘solution’ to the problem was stupid, thoughtless, and painfully out of line with our principles. It is wholly self-inflicted, and we deserve the criticism we’ve received. We will use the scar tissue from this painful mistake to help make better decisions going forward, ones that match our mission.”

Some customers also reported losing copies of other e-books on their Kindles, including novels by Ayn Rand and some of the Harry Potter books.

Amazon has promised not to remove books from customers’ Kindles again, although it is not clear whether the company will also change how it monitors the Kindle store for unauthorized works.