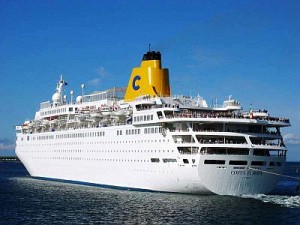 The contract gives Thomson an option to purchase the ship any time after five years.

The ship, which joined Costa’s fleet in 2002, was one of the first vessels to make regular cruises in the Arabian Gulf, with departures from Dubai, and the Indian Ocean out of Mauritius. Costa has five new ships slated to begin service by 2012.

The 1,500-passenger Costa Europa, operated by Carnival’s Costa Cruises brand, will join Thomson Cruises under a 10-year bareboat charter beginning in April 2010.
Under the agreement, Thomson has an option to purchase the 1986-built vessel, which was refurbished in 2002, after five years.

Thomson Dream will supplement the company’s cruise operation out of Palma, on the Spanish island of Mallorca, where the Thomson Destiny is sailing itineraries during the summer months.

The new vessel will sail three and seven night itineraries taking in areas of the Mediterranean, including Rome, Florence and Barcelona.

Thomson Cruises said there would also be the addition of a new port, La Goulette in Tunisia, a traditional fishing town 20 minutes from Tunis.

Although the Costa Europa will be leaving the Costa Cruises fleet, this Carnival brand is continuing to expand its 14-strong fleet with five new vessels entering service between 2009 and 2012, and representing a total investment of €2.4bn ($3.3bn).

Over the next three years, the Carnival group will launch 13 vessels for seven different brands.