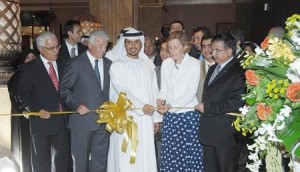 161 rare Islamic artifacts including the sword of Muawiyah, the Umayyad Caliphate; an embroidered Kaaba curtain that has not been moved in centuries and a replica of the Prophet Mohammed’s footprint are being put on display at the “Islam: Faith and Worship” exhibition for the first time in Abu Dhabi and the first time outside Turkey. Most of the pieces are from the Topkapi Palace Museum and the Turkish and Islamic Arts museum, both in Istanbul.

The pieces were chosen through a committee of curators and followed not only the story of Prophet Mohammed but of many aspects of faith and worship in Islam.” “Islam: Faith and Worship” has been organized following an agreement signed between Turkey and Abu Dhabi last July to promote the sharing of cultural resources, particularly those concerning Islamic heritage.

The exhibition is an unprecedented approach to displaying the objects, presenting them as part of a storyline that encompassed many aspects of faith. 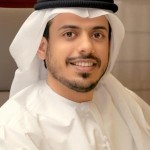 In a speech at the inauguration ceremony, Sheikh Sultan said the UAE has made comprehensive civil achievements over the past decades, placing the country among the ranks of modern developed countries, thanks to the wisdom and patience of the late Sheikh Zayed bin Sultan Al Nahyan, God bless his soul.

“As part of implementing the plan of our wise leadership and its sound vision, in setting a course and a strategy for comprehensive development in the country, the Abu Dhabi Authority for Culture and Heritage today plays an essential role in building a comprehensive intellectual cultural awareness, opening up prospects for innovation, and working to promote cultural dialogue.

This is in parallel to the implementation of a strategy for the preservation of the cultural heritage of Abu Dhabi, linked to the culture of our forefathers, their values, morals, faith and Arab identity,” he added.

A number of gold items are among a collection of Islamic artefacts that have gone on display at the Emirates Palace in Abu Dhabi.

Running until October 10th, the Islam: Faith and Worship exhibition draws on a range of treasures spanning eight centuries. These items are normally only seen in museums in Istanbul and were chosen to depict the history and practice of Islam.

Among the gold objects on show are 16th century gold locks etched with holy texts and a gold finial from the top of a processional flagpole featuring a cutaway pattern, the National reports.