Dubai, 1 October, 2009 Exterior cladding for worlds tallest building, Burj Dubai is now complete. The tower has accomplished a world record for the highest installation of an aluminium and glass fade. The total weight of aluminium used on Burj Dubai is equivalent to that of five A380 aircraft and the total length of stainless steel bull nose fins is 293 times the height of Eiffel Tower in Paris.

The last cladding panel numbered 24,348, weighing 750 kg and 1160mm x 6400mm in height was placed at a height of over 662 metres (2172 ft), thus accomplishing the mammoth task of cladding the world’s tallest building. Arabian Aluminium Company in association with Hong Kong based Far East Aluminium began exterior cladding of Burj Dubai in May 2007, and the vast project has involved more than 380 skilled engineers and on-site technicians.

A mixed-use tower featuring residences, corporate suites, and the world’s first Armani Hotel and Armani Residences, Burj Dubai is on course to be completed later this year with work on interiors progressing simultaneously.

With a total of 24,348 cladding panels over a total curtain wall area of 132,190 sq m, Burj Dubai’s shimmering exterior minimises heat transmission and saves energy. The total 103,000 sq m of glass used in the cladding panels can cover 14 standard football pitches and the 15,500 sq m of embossed stainless steel used can cover 34 National Basketball Association specified basketball courts. The total length of gaskets – 2,050,000 linear metres – if laid end to end is about the distance from Dubai to Damascus in Syria (2,052 km).

The cladding materials were specially made using advanced engineering techniques and include high-performance reflective glazing, aluminium mullions and textured steel spandrels with vertical stainless steel tubular fins. The cladding accentuates Burj Dubai’s height while lending it a shimmering slenderness. Panels of more than 18 different strength specifications and over 200 sizes have been used for Burj Dubai, all of them double-glazed and factory-sealed.

The world record for the highest aluminium fa ade installation was achieved by Burj Dubai earlier in the year at a height of 512 metres, less than one year after work started. 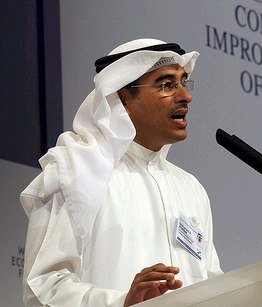 Mohamed Alabbar, Chairman, Emaar Properties, said that the completion of cladding work at Burj Dubai was a milestone both for Burj Dubai and the science of high-rise engineering.

“Burj Dubai’s construction and engineering techniques are unprecedented, and they are our contribution to the science of high-rise development. The cladding work has involved considerable innovation – vast amounts of research and simulation have pioneered advanced materials and installation techniques.” Alabbar added: “One of the key considerations when designing the cladding was maximizing resistance against heat transmission from the sun and improving energy efficiency within the tower. The materials used, as well as withstanding the harsh summer temperatures keep heat out of the building, allowing for a significant reduction in the amount of air-conditioning required. Burj Dubai’s exterior is a model for high-rise developers creating sustainable buildings of the future.” The cladding work for Burj Dubai is the largest project of its kind undertaken by Arabian Aluminium Company, (Aluminium Division of Al Ghurair Construction).

The high wind speeds were a major challenge. At the highest altitudes engineering teams had to work in tightly controlled shifts to install panels safely and efficiently. To minimise the risks involved in working at such towering heights, curtain-walling for the spire was pre-installed on the ground and then lifted to the summit to be secured.

“The precise engineering of the custom-made design meant that the 24,348 cladding units used on the tower are of the highest quality and consistency,” said Kayali.

The panels used on Burj Dubai have varying thicknesses, each featuring two glass pieces of about 8 mm to 12 mm thickness, buttressed by a 12 mm spacer for strength and resilience. The length and thickness of each panel was decided based on the heights and locations at which the panel was to be installed. Panels used at the highest altitudes were further strengthened with stainless steel in addition to aluminium.

Keeping the tower fa ade clean will be the next engineering challenge. To guarantee that every corner of Burj Dubai sparkles, 18 window-washing units are built into the tower including nine track-mounted telescopic cradles, each with an extendable jib arm for cleaning that reaches more than 20 metres.

Currently standing at over 800 metres, Burj Dubai is at the centre of Downtown Burj Dubai, a 500-acre mega project described as the new heart of the city of Dubai. The final height of the tower will be revealed when Burj Dubai opens later this year.