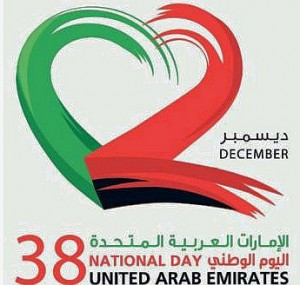 Dubai, Oct 31st, 2009: The Higher Committee for the UAE’s National Day celebrations headed by HE Abdul Rahman bin Mohammed Al Oweis, Minister of Culture, Youth and Community Development has approved the official emblem of the celebrations for 2009 and decided to circulate it as the symbol for all formal events across various emirates.

The Committee also affirmed the launch of the celebrations dedicated website and a call center by mid-November.

Al Oweis said that the choice of the logo for the 38th National Day celebrations was approved by consensus of the Higher Committee members and was chosen as the most expressive one from a group of five different entries.

The minister, who is also the chairman of the Higher Committee, said that the logo would be circulated to sub-committees to be adopted as the symbol of the events and official ceremonies.

He added that the logo is the true expression of the bond of love and patriotism cherished in the hearts of all citizens towards every part of their motherland. Among them are the people who lived the days of the formation of the UAE as well as the young generation who witnessed the renaissance.

The minister hailed the position the country has achieved under the wise leadership of President His Highness Sheikh Khalifa bin Zayed Al Nahyan, Vice President and Prime Minister of UAE and Ruler of Dubai His Highness Sheikh Mohammed bin Rashid Al Maktoum and Their Highnesses the Supreme Council Members and Rulers of Emirates.