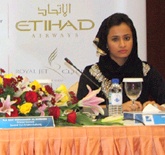 Montreal, 23 Nov. 2009 The United Arab Emirates, represented by the its representative to ICAO Capt. Ayesha Al Hamili, signed the multilateral statement of policy principles regarding the implementation of bilateral air service agreements, at the International Air Transport Association (IATA) 2nd Agenda for Freedom convened from 14 – 16 November.

This industry initiative, which was also signed by Chile, Malaysia, Panama, Singapore, Switzerland, the United States of America, as well as the European Commission, seeks to advance liberalization in international air transport.

The Multilateral Statement of Policy Principles addresses three main areas: Freedom to access capital markets: principles that would open the possibility for airlines to access global capital markets. This would be achieved with an agreement not to exercise bilateral rights that could allow them to block international services from airlines with non-national ownership structures.

Freedom to do business: principles oriented at reducing restrictions on market access and to expedite the further opening of markets in future bilateral negotiations.

All participating states and IATA recognized and relentlessly supported the essential role that ICAO plays in advancing liberalization in international air transport.

The UAE underscored that while the airline industry has a legitimate right to raise this issue, governments also have the genuine right to request that the concept of liberalization be authentically embraced by all airlines. The UAE has extensive experience with some foreign airlines that, either individually or as part of world’ alliances, act in a contrary manner to the liberalization agenda by aggressively lobbying their governments to deny, minimize, or request withdrawal of market access rights of other competing airlines.

While suggesting that other governments, not represented at this summit, also be invited to endorse this commendable initiative, the UAE made very clear that it will continue to pursue a second stage of the liberalization agenda where traffic rights are included.