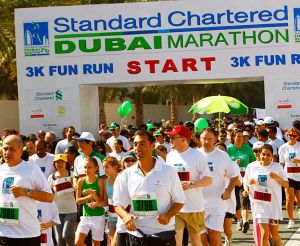 Dubai (UAE): With less than six months to go, registration has opened for the 2011 Standard Chartered Dubai Marathon, scheduled to get underway on January 21, 2011.

Competitors looking to sign up for the full marathon distance of 42.195km, the popular 10km event or the 3km Fun Run can register now by visiting the event’s official website www.dubaimarathon.org. In order to give organisers enough time to finalise all logistics, entries will close at midnight on December 31.

Held under the patronage of HH Sheikh Mohammed bin Rashid Al Maktoum, Vice President and Prime Minister of the UAE, Ruler of Dubai, and staged under the aegis of the Dubai Sports Council, the Standard Chartered Dubai Marathon has firmly established its position as one of the world’s leading road races thanks to prize-money of $1 million as well as a $1 million bonus for a new world record, courtesy of Dubai Holding.

“The 2010 event was a great success with thousands of runners from all over the world joining us to race over what we believe to be the fastest marathon course on the international circuit,” said event director Peter Connerton.

“Within minutes of opening up online registration, we were already receiving entries by the dozen so it shows how much runners look forward to competing in the Standard Chartered Dubai Marathon. By signing up now, athletes have a full five months to train and prepare for what we hope will be another hugely successful event.”

The Standard Chartered Dubai Marathon event continues to attract a healthy turnout of overseas runners as well as thousands of local and expat athletes based in the emirate.

The 2010 event – which saw the men’s event won by Olympic legend Haile Gebrselassie – featured runners from countries as far afield as Mexico and Australia, while TV coverage of the race was seen by more than 200 million viewers worldwide.

“The Standard Chartered Dubai Marathon is one of the highlights of our sporting and social year ,” said Jeremy Parrish, CEO UAE for title sponsors Standard Chartered. “Not only does it allow us to enjoy the talents of many of the world’s finest distance runners – many of whom will be using the event as they countdown to the 2012 Olympics – it also gives us the opportunity to maintain our active role in the community as part of our commitment to be ‘Here for good’.

“Sponsoring the marathon allows us to help promote sports health and fitness in the UAE. In our seventh consecutive year as title sponsors we are delighted to see more people incorporating fitness into their every day life.”

The launch of the registration process is the first of many announcements expected from event organisers as they finalise negotiations with elite athletes and sponsors alike. “We are looking into adding more activities around the event in 2011 to give runners and their families even more reasons to take part in the Middle East’s biggest marathon,” added Connerton.

Fees for participation in Dubai Marathon 2011

3km Fun Run Open to all