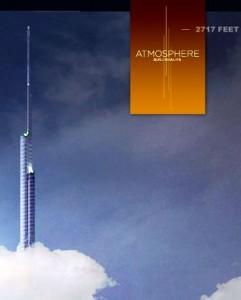 DUBAI — Dubai opened on Sunday a restaurant 422 metres (1,350 feet) up in the sky on the 122nd floor of the world’s tallest building, Burj Khalifa, its developers said.

Atmosphere in Dubai’s 828-metre (2,716.5-feet) building is “one of the finest luxury dining and lounge experiences in the world,” said Emaar Hospitality Group, an arm of giant property developer Emaar.

At two levels below the tower’s observation deck, the “world’s highest restaurant” can host “over 210 guests and features a spacious arrival lobby, a main dining floor, private dining rooms and display cooking stations.”

The restaurant is named as “At.mosphere” where the atmosphere inside is electric, the view outside is breathtaking. Sprawling at over 1,030sqm, the restaurant offers a 360 degree view of the city and beyond.

It’s a soaring symphony to fine dining. Right up there. At 442 metres. That is truly rare even if you like your main course well done.

Because, at the Burj Khalifa everything is exceptional, and this restaurant makes you feel you are someone special and you have arrived.

On the unveiling of the restaurant on Sunday, Mohamed Alabbar, Chairman, Emaar Properties PJSC, the developer of Burj Khalifa, said: “Being one of a kind, anywhere in the world, At.mosphere offers a unique restaurant experience. Every aspect of the restaurant has been carefully designed and executed. At.mosphere is indeed about offering the best in dining.” 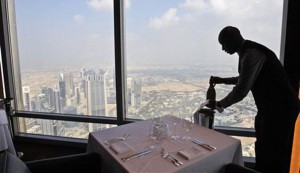 To mark the opening of the restaurant, 442 golden coloured balloons were released — some of them bearing dinner vouchers. So if you are the lucky one, and wondering what has popped out of the At.mosphere, head straight to Burj Khalifa to enjoy a grill and lounge experience.

“It redefines the restaurant concepts in Dubai, with a choice of two dining concepts and focus on offering a luxury lifestyle experience.”

Dardenne said the restaurant serves ‘eclectic European’ cuisine, with an emphasis on healthy eating. The upscale lounge has a seating capacity of 135 and a private area for 35. It can host over 210 guests and features a spacious arrival lobby, a main dining floor, private dining rooms and display cooking stations.

In addition to apartments, offices and Italian designer Giorgio Armani’s signature hotel, the building has an observation deck on the 124th floor, open to visitors at an entrance fee of at least 100 dirhams (27 dollars) per adult.

Oil-rich Abu Dhabi extended a lifeline of 10 billion dollars, on top of the same amount from the UAE central bank, to bail out Dubai’s heavily-indebted state firms in 2009.