Dubai: The Indian Consulate auditorium in Dubai reverberated with songs and rhythmic dance moves around floral arrangements by Telugu expatriates as part of Navratri celebrations. 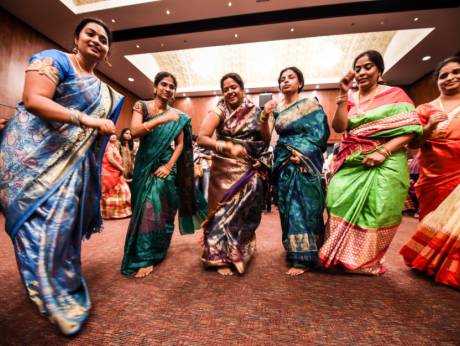 More than 400 Telugu-speaking expatriates attended the event on Saturday evening. It was a feast for the eyes to see women in their traditional silk saris and dresses gather around Bathukammas — seasonal flowers of myriad colours and fragrances arranged concentrically in a conical shape of various heights. The ritual involves circling the flower decorations, singing songs dedicated to the valour of women and to Hindu mythological characters while clapping rhythmically. These songs are handed down over generations.

Later, the flower arrangements were immersed in make-shift tanks as per the tradition imploring Bathukamma to return next year.
This floral festival that is symbolic of the cultural identity of Telangana is celebrated by women of the south Indian state. But in UAE, women from both Telangana and Andhra Pradesh have been participating in this activity proving they are one overseas. 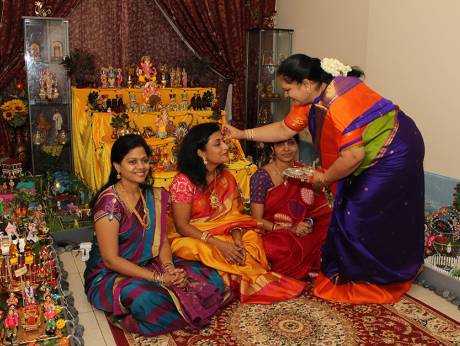 “The cultural spirit of Telangana was captivating thanks to the Indian Consulate and the Government of Telangana for arranging this festival of flowers,” said Krishnaveni a resident of Sharjah who joined the festivity along with her friends. “The rhythm of clapping by women adorned with colourful bangles coupled with the beats of dappu (a percussion instrument) showcased the happiness of friends,” she added.

Sudha Sandadi, a resident of Dubai, said: “Bathukamma festival brings back my childhood memories, Dassera holidays and grandparents’ home. I live in Dubai, a home away from home, and these special events make me feel that I am not far away from my motherland.” 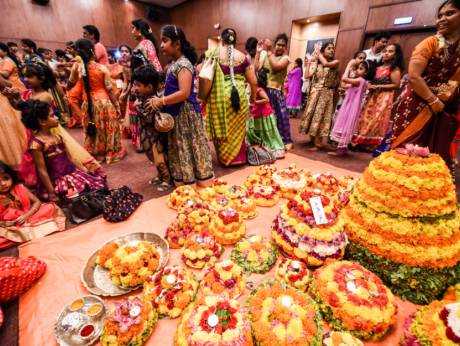 Last week, a similar event was held at the Indian Association Hall in Umm Al Quwain, where Telangana Member of Parliament Kavitha participated as the chief guest. The diaspora in Abu Dhabi held it on Friday. The festival has been gaining popularity especially after the formation of Telangana state and is now being celebrated all over the world wherever the Telugu community has a strong presence.

While, Bathukamma is indigenous to Telangana, the people from Andhra Pradesh celebrate Navratri with a display of dolls and miniature figurines called Bommala Koluvu. Lakshmi Panyala, a Sharjah resident, who has been involved in this activity every year, has chosen a traditional Telugu wedding as the theme this time. The display is simply awesome and the visitors and invitees are left amazed by the meticulous arrangements, with attention paid to the minutest detail.

All aspects of a Telugu wedding, right from when a man and woman meet to their engagement and the mehendi rituals to the wedding, reception and the newly-weds’ departure for honeymoon, were tastefully done. We get vignettes of Dubai including Dubai airport, desert safari, Burj Khalifa, Burj Al Arab, Palm Jumeirah and The Atlantis, which is supposed to be the couple’s destination for their honeymoon.
“Arranging Bommala Koluvu and inviting my friends gives me great pleasure during Navrati festival. This year I chose the wedding theme because I have a collection of several dolls and figurines that gave me the idea to do something differently,” Panyala said. “Most children staying away from India miss out on such events. So, I thought this will give them glimpses of a traditional Telugu marriage,” she said.
Panyala, a housewife with one daughter, said she is grateful to her friends who helped her in putting up such a splendid display.

The word Bathukamma is a conjugation of Bathuku (aliveness) and Amma (mother). And celebrating it with flowers is a tribute to nature, which gives us sustenance. This festival follows the monsoon when seasonal flowers are in full bloom such as cock’s comb (gunuga puvvu in Telugu), marigold, chrysanthemum and gulmohar, which form the major part of the flowers in making a Bathukamma.