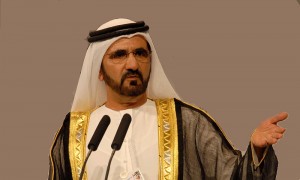 Dubai, 9th Nov. 2009: Ruler of Dubai His Higness Sheikh Mohammad Al Maktoom has reafirmed that Dubai & Abu Dhabi are one family. Following is the full tex of his speech delivered to Investor Conference in Dubai.

Thank you for inviting me to address such a distinguished gathering today. Before I commence, I would like to welcome you all to your second country, UAE and second home Dubai.

I am not known as a man who wastes time. So I will get straight to the subject, which is – I am sure – of most interest to you: Dubai’s economy. I will not waste your time in telling the details of the global financial crisis because you are the experts in this field.

However, today I would like to share with you some of my thoughts related to the crisis which has an impact on the whole world from East to West and has become a universal economic concern of which the biggest economies in the world have been affected, not only emerging markets.

As a result of its consequences, we have a new economic situation globally. Nevertheless, it has less impact on open economies compared with the closed and the protected ones or those with lesser links and interaction with the international market.

Thus, Dubai had to take necessary measures to deal with the consequences of the crunch of the global economy and shrinking of markets throughout the world. Dubai initiatives are not isolated from the serious and significant steps that the UAE has taken in this regard. As you know, Dubai is inseparable part of the UAE Federation.

I will not narrate the steps we have taken to combat the crisis, as you are aware of them whether on the local or the federal level.

Today, I prefer to speak about the important facts and fundamentals which I will summarize in a brief sentence. The global economic crisis despite of its short impacts on the local economy will not deter Dubai’s ambitions of implementing its development plans and will not divert it from its leading position and will not distant it from playing its role in the arena of the international economy. It will not suppress the will and determination of its citizens in continuation the development march.

Though I agree with that words are easy to say but the real test would be the implementation, I have full confidence in our ability to act. The achievements that stand today in Dubai are the most effective testimony that our vision regarding is practical and we are saying words in vain or have a day light dream which can be translated into reality.

We in the UAE, under the leadership of my brother, H.H. Sheikh Khalifa bin Zayed, the President of the UAE continue the march started by the late Sheikh Zayed bin Sultan and my father Sheikh Rashed bin Saeed, starting from the 70s of the past century. They both laid the corner stone of the UAE Federation which was the blessing birth of our nation.

When my father took a decision to expand the creek and ordered the construction of the Dubai International Airport and directed the development of the Jebel Ali Port in a chain of ambitious and giant projects in Dubai, those who were around didn’t hide their skepticism about the feasibility of such project at the time.

Dubai today is as being developed in the past and those are its sons who are known for their ambitious and visionary look for the future, to which they move in a steady steps with hard work being their motto and a great belief in the support of Almighty God, supported by self confidence and capabilities that is strong enough to tackle all the challenges that seem to others as an impossible mission.

Today we are harvesting what has been planted by our fathers; we have a diverse economy which is not based only on foreign investment that we will come any way to host in Dubai. We are proud to have a group of national companies that spread internationally with a great international reputation like the emirates airline, Dubai World, Jumaira Group, in addition to other companies that are functioning as the true shields of our economy in Dubai.

These achievements and others are the practical and real evidence through which we prove our ability to overcome the crisis of any nature and is our golden card to continue in exploring new horizons of growth and development.

We realized from the very beginning the importance of investments in establishing the foundation of our economy that enjoy the highest degree of credibility and reliability and cope with the latest achieved in the world in this regard.

Our strategic choice has been always to start from the point that others have achieved with emphasis on developing a private model that guarantees our abilities to face challenges in a flexible and efficient way with man as our priority.

Some may believe that Dubai could have acted faster in combating the impacts of the international financial crisis. However, we preferred to wait rather than rushing because we are keen to ensure strengthening our major enterprises and restructure it in a way that will have the momentum and the strength to cope with the realties in the new economy. This new economy has dictated on the great international economies slower growth rate, opening promising horizons for emerging markets like Inida and China which will play greater role in the future.

I am confident that the worst has passed, and that as the global economy stabilizes, Dubai today is well placed to exploit its inherent strength and its key strategic location to start new rounds in its march towards excellence; this race which has been witnessed by the whole world throughout the past 3 decades taken by our abilities of achievement and excellence.

I have a big confidence in Dubai’s ability to overcome the crisis not from vacuum, but based on true reality. I would like to share with you some of the characteristics of such realities which some of you might know but have forgotten when skeptical pre-judgments were made about Dubai capabilities to overcome the crisis which was forced on Dubai by international development that covered the whole world including Dubai.

It is a chain of elements that gathered in Dubai to make it – whether people like or dislike – the right option for international investments and enabled Dubai to host businesses that are capable of expanding in new markets with more than 2 billion people in an emerging region that is full with opportunities which are not available and specially in developing markets that become mature and saturated.

When completed, Al Maktoum International Airport will be the largest in the world with a capacity of 160 million passengers and 12 million tons of good and freight to be handled through its because it will equipped to receive passengers and giant freight carriers. Upon the completion of the logistics of the infrastructure, we have emphasized upon developing legal framework and infrastructure that is meant to support our financial sectors which is one of the 4 major economic sectors in Dubai.

The world has witnessed the success of Dubai as a comprehensive financial market that is located in the middle of the international market from New York and London in the west to Hong Kong and Tokyo in the East to act as a central link based on regulatory structures including Dubai Financial Center that earned the respect and appreciation of the international financial community in the world.

We succeeded in Dubai in building a friendly environment for businesses that catered to the needs of investors through facilities including exemption from income and corporate taxes or through offering efficient technology infrastructure and real estate services in addition to vocational and professional facilities that cater to the needs of the investor and his/her family members. There are the Dubai Internet and Media City and Dubai studios in addition to the knowledge village and academic cities as well as the TCom and other quality projects that aimed at establishing platforms for knowledge economy on the land of Duabi which we are proud of with still more to come.

I am not going to spell out all the details that make as confident and sure about Dubai capabilities to overcome this passing crisis, but I want to mention that those who believe that the remarkable success of our real estate development projects was the sole driver of our development. No one could deny the great leap in real estate projects in the in past few years, but it would be unfair to summarize Dubai’s experience in those projects only regardless of their giant size, as Dubai success in its development story covers a wider range and more depth and varieties from a strategic point of view.

In addition to the above, Dubai is not alone. It is inseparable part of the UAE and this sold and strong federation which holds each other as a great strong structure.

Dear Guests, My optimism in ending the crisis and confidence in Dubai’s ability to restore its strong growth rate soon is based on ideological background and human heritage linked to my Bedouin roots which my nation and I are proud of. Bedouins are strong by nature with strong will in combating crisis. They only know determination to achieve the goal and walk towards that end.

Those who know me closely trust my statements and my belief that the second part of bonds program initiated by Dubai early this year would be highly received by subscriber and would be directed to settle Dubai financial obligations in the coming years.

Our development journey was and will be race towards excellence.. a race towards establishing Dubai as a leading business center and ensure its credibility as an unchallenged financial and trade capital in the Middle East.

Ladies and gentlemen, in the past 20 years, Dubai enjoyed healthy growth rates. A lot of individuals and business have benefited from such growth, but the economic slow down offered us an opportunity to sit and consider the world around us. I believe such space was important to catch our breath and work on reinforcing our competitive capabilities to resume the race.

We can deny that the international crisis has put us in a the middle of space of silence with great information vacuum that was a fertile space for rumors and propaganda. We should not allow this to happen again in the future as transparency and effective communication channels are basic elements in building mature and civilized nations.

We should not forget that the economic shrink is in its way to disappear similar to other economic downturn that faced the world in the past year. I listened with a great attention during the past year to a number of business leaders in Dubai, Emirates, Asia, Europe and the US as well as executive directors representing different economic sectors including airline, hotels and investors. I was listening to them and to their ambitions with a great attention. Today, I ensure all of them from this stage that we will continue our investments in infrastructure in all sectors to serve our national interest and ensure the success of our partners and investors from all over world in all sectors.

Dear Guest, Our celebration of inauguration of Dubai Metro was a practical testimony of our determination to strengthen Dubai as an international City having all pillars of excellence on the short and long run.