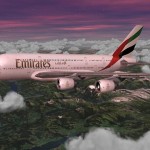 Dubai, 13 Dec 2009 Forging ahead with the airline’s immense fleet expansion Emirates has taken delivery of its sixth Airbus A380 aircraft.

The colossal aircraft landed in Dubai late last night after travelling from the J rgen Thomas Delivery Centre in Hamburg, Germany. The aircraft is currently being fitted with the airline’s service hallmarks at Emirates’ world class engineering facility, in preparation for entry into service.

Taking delivery of this mammoth plane Adel Al Redha, Emirates’ Executive Vice President Engineering and Operations said: “The delivery of our sixth A380 aircraft is testament to Emirates’ steadfast resilience amidst the global economic crisis. The A380 offers us the ability to support our operational needs and meet passenger demand, an important factor with international load levels looking positive over the next few months.” “We remain resolute in our expansion plans in terms of both fleet and destinations. In the last four weeks alone Emirates has announced plans to start services to Tokyo and Amsterdam in 2010 and has also taken delivery of three new aircraft including two Boeing 777-300ER, in addition to today’s Airbus A380.” Serving six far reaching destinations including; Sydney, Auckland, Bangkok, Toronto, Heathrow and from tomorrow Seoul, Emirates’ A380 aircraft provide a greener option for long haul travel through substantial reductions in noise, emissions and fuel burn. From 29th December Emirates will also commence an A380 service to Paris, with the carrier’s seventh A380 aircraft due for delivery later this month.

Designed to provide customers with the greatest travel comforts on long-range journeys, the Emirates’ A380 – with 14 First Class Private Suites, 76 Business Class and 399 Economy seats – represents the latest innovation and technology from a company recognized internationally for its in-flight amenities and services.

Unique to the Emirates aircraft are its Shower Spas – two fully-equipped bathrooms in the First Class cabins with shower facilities. Emirates A380’s ground-breaking in-flight product also features an Onboard Lounge for First and Business Class passengers which includes a bar with a wide range of beverages and canap s as well as an exclusive space to socialise or simply relax.

Spread over two levels, the whole of the A380 upper deck is dedicated to premium passengers. Towards the front, First Class passengers can relax in one of 14 flat-bed, massage-equipped Private Suites. These incorporate remote-controlled doors, a work desk, an electrically controlled mini-bar and the most advanced in-flight entertainment system available to travellers.

The main deck is dedicated to Economy class passengers and is fitted with comfortable seating as well as seat back individual 12 inch LCD screens, offering passengers a wide range of in-flight entertainment.