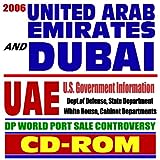 Product Description
This unique electronic book on CD-ROM has an amazing collection of the finest federal documents and resources about the United Arab Emirates (UAE) and Dubai, providing encyclopedic coverage of all aspects of the country. There is updated material about the ongoing controversy surrounding the sale of U.S. ports to DP World. UAE as described by the CIA: The Trucial States of the Persian Gulf coast granted the UK control of their defense and foreign affairs in 19th century treaties. In 1971, six of these states – Abu Zaby, ‘Ajman, Al Fujayrah, Ash Shariqah, Dubayy, and Umm al Qaywayn – merged to form the United Arab Emirates (UAE). They were joined in 1972 by Ra’s al Khaymah. The UAE’s per capita GDP is on par with those of leading West European nations. Its generosity with oil revenues and its moderate foreign policy stance have allowed the UAE to play a vital role in the affairs of the region. The UAE has an open economy with a high per capita income and a sizable annual trade surplus. Its wealth is based on oil and gas output (about 30% of GDP), and the fortunes of the economy fluctuate with the prices of those commodities. Since the discovery of oil in the UAE more than 30 years ago, the UAE has undergone a profound transformation from an impoverished region of small desert principalities to a modern state with a high standard of living. At present levels of production, oil and gas reserves should last for more than 100 years. The government has increased spending on job creation and infrastructure expansion and is opening up its utilities to greater private sector involvement. Higher oil revenue, strong liquidity, and cheap credit in 2005 led to a surge in asset prices (shares and real estate) and consumer inflation. Any sharp correction to the UAE’s equity markets could damage investor and consumer sentiment and affect bank asset quality. In April 2004, the UAE signed a Trade and Investment Framework Agreement (TIFA) with Washington and in November 2004 agreed to undertake negotiations toward a Free Trade Agreement (FTA) with the US. The disc contains material from the State Department, Department of Defense, White House, and cabinet agencies including Agriculture, Energy, and the U.S. Citizenship and Immigration Services. There is complete information about geography, people, government, the economy, communications, transportation, military, and transnational issues.