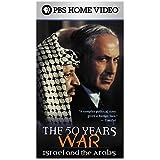 Amazon.com
The conflict in the Middle East between Israel and its neighbors is given comprehensive treatment in this two-video set produced by PBS. Using archival footage and extensive interviews with participants, the production begins by explaining conditions in Palestine at the end of World War II and the crisis created by the exodus of European Jews who went to the Middle East after the Holocaust. The withdrawal of the British, who had controlled Palestine for decades, is detailed, as is the creation of the state of Israel. Much of the region’s history is complex, with the local struggles being conducted at times as a part of the cold war between the United States and the Soviet Union, but these videos do an admirable job of explaining the complexities of the situation. The segment on the Six Day War, for example, is masterful, with the scenes shifting from Israel to Egypt to Washington to Moscow, the story developing before the viewer’s eyes. The 50 Years War is often a tale of mistrust and betrayal, but this production strives to present a balanced view of history, and is not only impressive for its command of the facts but for its skillful and often dramatic presentation of history. –Robert J. McNamara

The 50 Years War: Israel and the Arabs