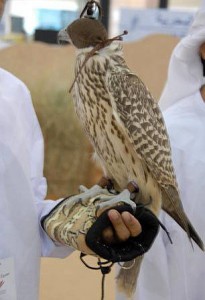 Abu Dhabi, 12th July 2009 The UAE is stepping up efforts to have falconry inscribed on the Representative List of the Intangible Cultural Heritage of Humanity of the United Nations Educational, Scientific and Cultural Organisation, UNESCO.

The effort is being led by the Emirates Falconers’ Club and the Abu Dhabi Authority for Culture and Heritage (ADACH) as part of an international campaign to protect falconry as a part of the world’s cultural heritage ADACH representatives will meet in London tomorrow, 13th July, with a panel of experts from other Arab states involved in a joint submission of a file to UNESCO requesting the registering of falconry as a part of the world’s intangible human heritage. The file is due to be submitted by the end of August. If it is accepted, all aspects of falconry will then be recognised under the UNESCO Convention. This is expected to encourage research into the social history of falconry, to enrich the historical consciousness of falconers and to promote and safeguard falconry for future generations.

Dr Nasser bin Ali Al Himeiri, Director of ADACH’s Department of Intangible Heritage, said the prime goal of registering falconry in the UNESCO list was to raise awareness regionally and internationally about the value of falconry as a human heritage and art.

”We also aim to encourage countries to devise sound policies for safeguarding this indigenous human heritage and give falconry the complete legitimacy in countries that have no relevant protection laws,” he told WAM.

As part of preparation of the nomination file, he said ”We have contacted and visited a number of countries including France, Qatar, Saudi Arabia, Tunisia, Morocco, the Czech Republic, Belgium, Austria, Syria, Turkey, Mongolia, Spain, Jordan and South Korea. We have held talks with officials and falconers in these countries to seek their observations and recommendations in order to compile a full file. ADACH has also made strenuous efforts to satisfy the criteria and procedures for inscription on the UNESCO list, ” he added.

At a local level, he added, “we have prepared a list of the elements of falconry in the intangible cultural heritage in the UAE. These number over 4000 items representing 60 per cent of non-material heritage in the emirate of Abu Dhabi. A legal framework for conserving intangible heritage will be worked out and a nation-wide educational campaign will be conducted to ensure wide engagement of the civil society in the efforts to protect falconry,” he said.

In June, ADACH hosted a workshop to discuss the requirements for registration of falconry in the UNESCO intangible heritage list as part of the preparation by Arab States to submit a common dossier to UNESCO.

Falconers from the UAE, Saudi Arabia, Qatar, Morocco and Syria attended the workshop to review the requirements of registration, the result of a series of surveys, and ways to involve local communities in conservation.

Falconry is one of the oldest traditional sports in UAE and one of the basic elements of the national identity according to Al Himeiiri. “The UAE was chosen to lead the registration due to its efforts to preserve this traditional practice through the Emirates Falconers’ Club and ADACH,” he said.

The UAE was elected as a member of the Intergovernmental Committee for the Safeguarding of Intangible Cultural Heritage in September 2006 for a four year period. It was also elected as the chairman of the committee in the third session hosted by Turkey in October 2008 and joined Turkey, Estonia, Kenya, Mexico and Korea as a member of the panel of experts.

The UAE ratified the Convention for the Safeguarding of Intangible Cultural Heritage in 2005. This seeks to establish a framework of international cooperation and support for the protection of traditional dance, music, theatre, craftsmanship, ritual and festive events, and other forms of intangible cultural heritage so as to prevent them disappearing and to pass this heritage to future generations.

Abu Dhabi will host the fourth session of the Intergovernmental Committee for the Safeguarding of the Intangible Cultural Heritage from 28 September to 2 October this year. Among other tasks, the Committee will inscribe the first intangible cultural heritage elements on the Urgent Safeguarding List and the Representative List. It will also select programmes, projects and activities that it considers best reflect the principles and objectives of the Convention for the Safeguarding of the Intangible One hundred and eleven nominations for the Representative List were examined by a subsidiary body of the Committee in May this year, and the Committee will decide on those which are to be inscribed on the UNESCO list.

The Convention for the Safeguarding of Intangible Cultural Heritage says that “intangible cultural heritage” means the practices, representations, expressions, knowledge, skills – as well as the instruments, objects, artefacts and cultural spaces associated therewith – that communities, groups and, in some cases, individuals recognise as part of their cultural heritage. This intangible cultural heritage, transmitted from generation to generation, is constantly recreated by communities and groups in response to their environment, their interaction with nature and their history, and provides them with a sense of identity and continuity, thus promoting respect for cultural diversity and human creativity.

For the purposes of this Convention, consideration will be given solely to such intangible cultural heritage as is compatible with existing international human rights instruments, as well as with the requirements of mutual respect among communities, groups and individuals, and of sustainable development.

Falconry first appeared at the dawn of modern civilisation and was already popular in the Middle East and Arabian Gulf region several thousand years ago. It appears to have been practiced in Iraq by 3,500 BC and the Epic of Gilgamesh, dated to around 2,000 BC, clearly refers to the use in Iraq of birds of prey for hunting.

Al Harith bin Mu’awiya, an early ruler of part of what is now Saudi Arabia, is said to have been among those who trained and hunted falcons. Early Arab poetry also includes much about falcons and falconry.

From the Arabian Gulf, the sport then spread throughout the Islamic world, eastwards into the Islamic empires of central Asia and westwards across North Africa and into Europe, with different, distinct styles of falconry emerging.

The sport is mentioned in a verse in the Holy Quran that states that falconry is a legitimate pursuit. Today, around half of the world’s falconers live in the Middle East.