Air Arabia, the UAE-based low-cost airline, has announced that it will introduce a new flight to the holy city of Medina in Saudi Arabia from September 1st 2009.

Medina will be Air Arabia’s 58th destination in general and and fourth in Saudi Arabia. The launch of this new destination is part of Air Arabia’s strategy to strengthen its network in the kingdom, the company said in a statement.

Initiallly Air Arabia will fly to Medina on Tuesdays and Saturdays. 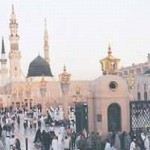 “There is an extremely high level of demand among Muslim pilgrims for value-for-money service to Medina, especially during Hajj season. We are confident that Air Arabia’s direct flights to Medina will offer greater convenience for all those travelling to the city, especially pilgrims performing Hajj and Umrah, the Islamic pilgrimage.”

Medina, with the population of 1.3 million, is one of the largest cities in western Saudi Arabia.

Every year more than three million people visit Medina as part of hajj, the largest annual pilgrimage in the world.