The Saluki Beauty show will take place from September 30 to October 03 in the Abu Dhabi National Exhibition Center.

The Arabian Saluki Beauty Contest gives Saluki owners an opportunity to showcase their precious hounds – both smooth and feathered on an international level.

The contest will be judged by Mrs. Cathy Smith of Australian Saluki Club.

Salukis will be judged upon the characteristics of the standard of the breed (head, general structure, coat, movement and general impression). But unlike European dog shows, the Arabian Saluki Beauty Contest judges not only on the standards of the breed, but more than that values the Saluki’s predominant purpose (hunting, chasing, guarding) and mental condition (brave, dominant). The winners will be rewarded with valuable prizes. 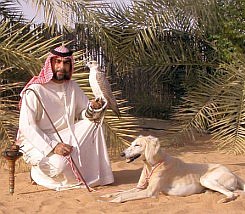 Hamad Al Ghanem, Breeder, Registrar General and Director of the Arabian Saluki Center, said: “I am pleased to organise the Forth Arabian Saluki Beauty Contest. After three successful years the show is now established as a regional get-together for Saluki lovers and owners from the UAE and other GCC countries.

Until today, a total of 172 Saluki owners have registered their hounds to participate.” Al Ghanem continued: “The show gives us the opportunity to highlight not only the incredible characteristics of the breed itself, but to further create public awareness in our proud Cultural Heritage, especially for the younger generations.

Throughout the times and the changing generations, the traditional values and ethics of Arabian Bedouin are being forgotten and it is our duty to preserve and celebrate them for future generations.” The Arabian Saluki Center, established in 2001 by Hamad AlGhanem with the support of the Emirates Falconers’ Club, commits itself to both the preservation of the pure breed Arabian Saluki and the traditional way of the Arabian Hunting as an essential part of Cultural Heritage. Arabian Salukis are one of the world’s oldest breeds; history shows that they can be traced back almost 13,000 years. Originating from the Arabian Peninsula, these desert hounds, which are known for their exceptional stamina, intelligence and loyalty, were bred to assist man in chasing prey and catching it in the harsh desert climate. Arabian Salukis are highly prized by the Bedouins not only for the hunting purpose, but as a companion and a member of the family.

The Saluki is perhaps the oldest known breed of domesticated dog. A study published in the May 21, 2004 issue of Science confirms the Saluki’s antiquity through DNA analysis identifying it as one of the earliest breeds to diverge from wolves.[1] Like elsewhere in the Fertile Crescent region, Saluki-like animals appear on the ancient ceramics from Susa and Sialk of 3500 BC in Iran, as well as on Egyptian tombs of 2100 BC.[2] The breed had been occasionally imported to England before 1840, however there was no serious interest until the Hon. Florence Amherst imported a breeding pair of Salukis from Lower Egypt in 1895 and began working to popularize the breed. The Kennel Club recognized Salukis in 1923.

Widely admired for its beauty, speed and endurance, the Saluki is a sighthound and historically traveled throughout the Middle East with nomadic desert tribes over an area stretching from the Sahara to the Caspian Sea. As a result, different Saluki subtypes, varying mostly in colour and coat, can be found across this widely scattered area.

Although the greyhound is the fastest dog breed with a top speed of around 45 mph (72 km/h), the Saluki’s strength lies in its great endurance and stamina. They may not be the fastest sighthounds, but they can run for much longer than the sprinting breeds.

They are 58-71cm and 13-30kg in weight. The overall appearance of the Saluki is one of grace and symmetry. Salukis are “sight” hounds which means they sight the quarry, run it down, catch and retrieve/dispatch it. The impression given should be one of the ability to hunt efficiently. While on the coursing field the impression becomes a reality with the addition of an intense desire, drive, and focus that is not seen in the show ring. Combined, these qualities comprise undeniable Saluki breed type and function.

There are two coat types evident in the Saluki gene pool: smooth and feathered. Smooth is a short coat over the entire body, and feathered is long hair on the ears, backs of the legs and tail. This hair can be of varying lengths and sparseness is not to be penalised. Both coat types exhibit the same qualities. In both varieties males may range from 23 to 28 inches at the top of the shoulder with females measuring somewhat smaller.

Dogs of King AntefThe Saluki has historically served as a courser, a speedy hunting dog that operated in packs. They often hunted in tandem with falcons which locate the prey and for the dogs to run down.

Salukis appear on Egyptian tombs from 2100 B.C. The dogs were so esteemed that they were often mummified like the bodies of the Pharaohs themselves. Numerous Saluki remains have been found in the ancient tombs of the Upper Nile region.

In Muslim cultures, dogs are often seen as unclean. A saluki, however, is given a different status by the Arab culture. The Bedouin value them, breeding them for both beauty and hunting qualities. A saluki, instead of being viewed as unclean, often sleeps in tents with their owners, to be protected from the heat of the day and the cold of the night.

The Breed Established in the West
In England, a few specimens of the breed had been sporadically imported as curiosities since the mid-1700s. The first successful breeding line of Salukis begins in 1895 with the Honourable Florence Amherst (daughter of the 1st Baron Amherst of Hackney). Having seen Salukis on a Nile tour in that year, she imported a breeding pair from the Al Salihah area of Lower Egypt. [5] A champion of breed purity, she struggled alone for nearly three decades and real Saluki popularity did not take hold until the early 1920s when officers returning from the war in the Middle East and the Arab Revolt brought their pet Salukis home with them.

One of these was Brigadier General Frederick Lance of the 19th Lancers, who. with his adventurous wife, Gladys, returned home with two Syrian Salukis from Sarona where he was stationed during the post-war occupation.[6] The Lances were avid hunters and rode out with their Saluki pack and terrier to course jackal and Dorcas gazelle in the desert. Their imported male, Sarona Kelb, became a significant influence on the breed in the West.

Together, the Lances and Florence Amherst mounted a campaign for recognition of the Middle Eastern breed that luckily coincided with the phenomenon of “Tutmania” caused by Howard Carter’s spectacular discovery of Tutankhamun’s tomb in late 1922. In 1923, the Saluki or Gazelle Hound Club was formed and the Kennel Club granted official recognition to the breed.[7] Popularity of Salukis dramatically increased and The American Kennel Club would recognize the breed and the Saluki Club of America in 1927.

Imports to England during the inter-war years were chiefly from areas of British military influence and commerce: Bahrain, Egypt, Transjordan, and Iraq. Both Florence Amherst and the Lances imported breeding stock from the latter two countries. Despite substantial populations of Salukis in Germany, The Netherlands, and Sweden, none of these were imported to England.[8]

English Salukis (chiefly descendents of Sarona Kelb) were exported to many countries,[9] but by the mid-1930s, interest slackened, and with the outbreak of World War II, breeding and show activities almost entirely stopped. The number of litters was minimal – just enough to keep the breed alive. Food rationing reserved all edible meat for humans and rather than see their beloved Salukis starve or perhaps killed by bombs, some owners euthanized entire kennels.[10] A small number of Saluki kennels survived the war, and along with fresh imports belonging to a second wave of soldiers returning from the Middle East, the slow process of re-establishing the breed began again.