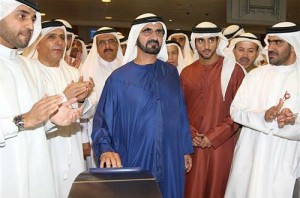 DUBAI The Dubai Metro was launched today 9th September 2009, A unique date and certainly a unique moment for Dubai. Once merely a dream of modernity and maturation, Dubai Metro has been realised in the most profound way, and residents turned out in their thousands on Wednesday night to be part of the historic event.

All around the city at Metro stations set to be officially opened, residents applauded, with many believing that life in the city may never be the same again.

Fireworks erupted and a laser show dazzled onlookers at the Mall of the Emirates, where at 9.09pm — a moment that will be permanently marked at the station — His Highness Shaikh Mohammed bin Rashid Al Maktoum, Vice-President and Prime Minister of the UAE and Ruler of Dubai, launched the Dubai Metro. 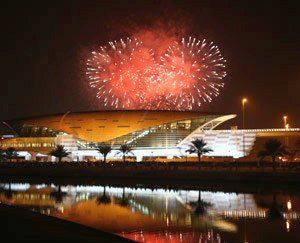 Shaikh Mohammed and hundreds of VIPs and media boarded the train, and, to the sounds of clapping and screams of joy, it glided almost silently out of the Mall of the Emirates station at 9.11pm. The train stopped at stations along the way to mark the occasion with celebrations including a commemorative coin and a mosaic portrait. Fireworks erupted again between Financial Centre and Khalid bin Waleed stations.

An hour and four minutes after the start of its first official journey, the train arrived at Rashidiya station at 10.15pm.

The launch of the Dh28 billion fully automated, driverless train system, which has been under construction for more than three years, incorporates 10 of 29 stations along the Red Line.

‘We achieved in four years what Singapore and Switzerland did not do in 10 years combined,’ said Mattar Al Tayer, chairman of the board and executive director of the Roads and Transport Authority, speaking at Mall of the Emirates ahead of the launch.  A highly anticipated event in Dubai and across the UAE, residents, who can take their first rides on the train from 6am today, started gathering hours ahead of the launch. From station to station, onlookers began proceeding towards the stations in the afternoon in hopes of seeing something special.

Until the last minutes, construction workers could be seen scrambling to clean surfaces of dust and debris in preparation for the arrival of the VIP guests.

A labour force of more than 30,000 workers had been toiling relentlessly to complete the Metro project ahead of its auspicious 09/09/09 launch date.

The mall proved a fitting choice for organisers looking to broadcast the opening ceremonies live in front of everyday residents. Shopping malls in Dubai have long been known to be the main intersection between different segments of society, often segregated by socio-economic and national constraints. But for the first time, the Metro aims at breaking these barriers and bringing together residents at unprecedented levels.

Among those believers was Rhana Natour, an American researcher who has lived in the UAE for nearly a year.

‘Dubai has always been an amazing city,’ she said, ‘but it was often beyond accessibility. Now, the Metro will bring together once fragmented parts of society into one.’

Pacing along the mall pavilion, Ali Khamis Alshamsi calmly surveyed the growing crowds. The young Emirati commuted from his hometown of Al Ain to witness the festivities, ‘a great moment’ in his life, he said.

Even in economic recession, Alshamsi believes that UAE leadership is committed to improving lives. ‘They promised us a Metro today, and they delivered.’