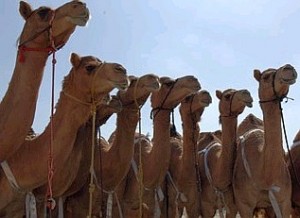 Abu Dhabi, 5th Oct. 2009  The Abu Dhabi Authority for Culture and Heritage (ADACH) will launch the third session of Mazayina Dhafra Camel Festival on January 30 until February 8, 2010, in Zayed City in Al Gharbia (the Western Region).

The Festival is held under the patronage of HH Gen. Sheikh Mohammed bin Zayed Al Nahyan, Crown Prince of Abu Dhabi and Deputy Supreme Commander of the Armed Forces.

Mohammed Khalaf Al Mazrouei, Director General of ADACH, and Chairman of the Organizing Committee, said the culture-reviving Festival will include many important traditional events, such as the traditional market, competitions on poetry, dates and photography, in addition to many surprises that will be announced later.

Mazrouei noted that the main event at the Festival – Mazayina Dhafra – aims to preserve the purebred local Asayel and Majahim camels.

The Festival also seeks to highlight Bedouin culture, activate heritage tourism, and promote the name of Al Dhafra in Al Gharbia tourism map, in addition to activating the economic movement in the region.

More than 24,000 camels belonging to 2000 camel owners in the Gulf region participated in the last session for prizes worth Dh 40 million(approximately 11 million US dollars).