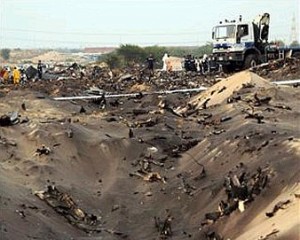 Eyewitnesses at the scene of a devastating plane crash in Sharjah have described what they viewed as a heroic effort by the pilot to avoid populated areas on the ground.

The dead pilot was named as captain Mohammad Ali, a Sudanese resident of Sharjah. 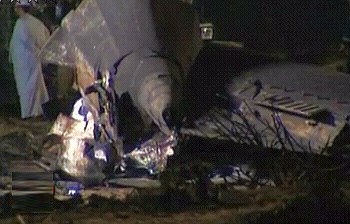 Ramsey Yaseen, another pilot who flies commercial aircraft out of Sharjah Airport was pl
aying golf close the scene of the crash. The experienced officer described to UAE newspaper Gulf News how he saw the plane struggling to take off.

“I noticed it and thought that he was not going to make it,” said Yaseen. “I see this all the time with cargo planes. If they are heavy, it often takes the pilot a while to lift the nose of the plane to climb,” he told the paper.

The Sudan Airways Boeing 700 managed to take off, but the nose would not lift, he said. According to Yaseen, the pilot appeared to pick his spot on the ground, pulling off a series of drastic manoeuvres before crashing into a quiet road. 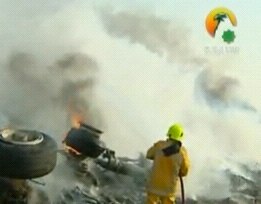 “I’m almost positive that the pilot decided to take the plane down there because he knew he was not going to make it. He wanted to prevent the plane from crashing into a populated area so he nosedived onto a quiet road,” he told Gulf News.

A second eye witness, Ahmad Yaseen, 28, from Pakistan, told Gulf News the plane appeared to be deliberately steered away from built up areas.

“The plane took off in front of us but was not balanced in air. I don’t think it was the pilot’s fault, the plane was probably overloaded. However, I did notice that the pilot tried to save the warehouses which it could have crashed into, and veered it to the barren land on its right,” he told the paper.