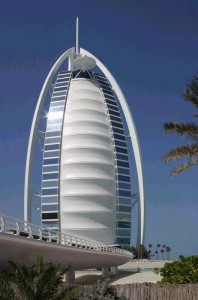 Dubai 10th November 2009 – Burj Al Arab Hotel regarded is one of the finest hotels of the world and a symbol of Dubai celebrates its first ten years in December 2009. The iconic bulding, which resembles a giant billowing sail, has become one of the most notable landmarks in the Gulf emirate. It is one of the most luxurious and most expensive hotels in the world but much more besides.

Many people call it the 7 Star hotel of Dubai, “There is a myth surrounding this hotel. We never claimed to be a seven-star establishment but we have acquired that reputation,” said Heinrich Morio, general manager of the Burj Al Arab.

Perhaps the considerable reputation of the hotel arises from 202 lavishly-appointed duplex suites or the seemingly endless 22-carat gold-plated surfaces. Adding to the upmarket impression is an unusually large staff of 1,500, whose job it is to pamper the guests. This amounts to seven employees per visitor. The prices are definitely high. Check Rates for Burj Al Arab

Such features made the hotel unique when it first opened. “We cater for the world’s most discerning guests and the level of expectation is extremely high,” said Morio who hails from Germany. Despite the global economic downturn, the Burj al Arab has not lowered its prices and is well-booked, he added.

Gaining access to this noble house of Arabian hospitality on Jumeirah Beach Road is not as straightforward as it looks and a guarded causeway prevents tourists from simply strolling through the entrance. Those without a reservation in one of the restaurants or a booked room for the night are left to gaze at the 321-metre-tall space-age structure from the outside. For illustrious guests a fleet of ten chauffeur-driven Rolls-Royce limousines is available to transport them from the city’s airport.

The interior of this hotel is best described as serenely sumptuous with fountains in the foyer and all manner of luxurious fittings. The hotel belongs to the Dubai Holding, most of which is owned by the ruling al Maktoum family. After around 40 years of oil wealth they decided to transform Dubai into a magnet for financiers and holidaymakers.

Before that could happen the emirate had to make a name for itself worldwide. The Burj Al Arab placed a key part in that strategy. “The owners wanted to create the most handsome, luxurious and splendid hotel the world has ever seen,” said the manager. A brief on this scale made it easier for the architects and designers to create features shared with only a handful of hotels in the world.

One example is the pets department where British-born Warren R Baverstock looks after the hotel’s numerous aquariums. “I came to Dubai ten years ago and as I lay on the beach and gazed at the hotel I was simply thrilled,” he recalled. Back then he quickly made up his mind to trade northern Europe for the heat of the desert.

A lot has changed in Dubai since the hotel opened in December 1999. The metropolis has continued to expand and where locals once played impromptu football games alongside the hotel, exclusive apartments and hotels have mushroomed. Yet staff at the Burj al Arab do not fear competition from spectacular new resorts such as the new Palm Island.

Dubai’s signature building no longer stands alone and in December of this year it is set to be dwarfed by the new Burj Dubai, the projected world’s tallest structure with more than 160 floors.

The new hotel has been the subject of much speculation regarding its precise height – the official word is that is stands at over 800 metres – along with the exact opening date and the scale of planned public celebrations to mark its inception. The investment costs are no secret and it is well known in Dubai that this latest superlative structure cost around a billion dollars to erect.