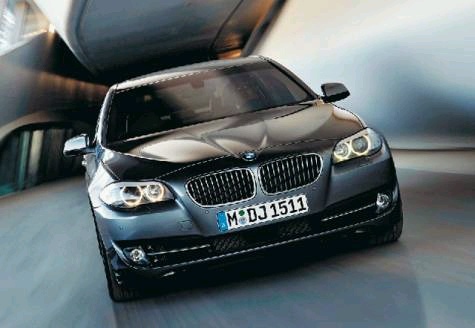 As for the styling, out are the Bangle-butt and the hardened lines of the E60, and in are more traditional creases on the bonnet and just beneath the doors, reminiscent of earlier models such as the E39.

Let’s make it clear at the outset. The sixth-generation BMW 5 Series hasn’t seen a massive shake up when it comes to engines. However, all the models across the range boast more grunt this time around.

Naturally, M5 fans can expect some impressive numbers when the car is unveiled next year, but it’s the only model that gets a serious downsizing. Word is that BMW engineers will drop the F1-derived V10 in favour of a twin-turbo V8, similar to the one in the X5 M and X6 M. So look towards their 555bhp figure.

Further enhancements to the new 5 Series include greater stability, courtesy of a longer wheelbase and wider track, as well as double wishbone suspension at the front and a multi-link set-up out back. For those who feel there is a bit of Robert Kubica within, the Sport Plus option on the Dynamic Drive Control will stiffen the suspension, tighten the steering and improve throttle response.

The front also lends itself to a softening of the headlights and a more prominent-bulbous kidney grille. The overall stance is, meanwhile, improved by the reduction of the front overhang, a slight widening of the body and the sweeping coupé-like roof line, all portraying a sleeker, sportier image overall. As before, xDrive AWD is available as an option, along with an all-wheel steering package.

This being a BMW there will be a plethora of gadgets on offer. Options such as park assist, lane departure warning, night vision camera with pedestrian recognition, head-up display, high-beam assist and pretty much anything you can currently get on the new 7 will be available in the 5 Series. The 5er will hit UAE showrooms in March 2010.