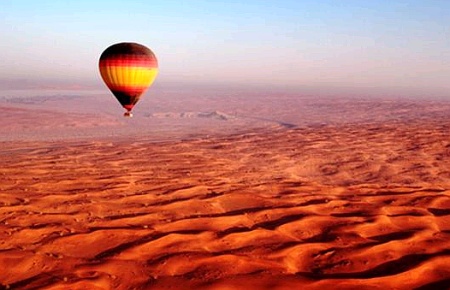 Abu Dhabi, 9th Dec. 2009: One of the world’s most experienced balloon companies, with operations in Germany, New Zealand and Hungary, has begun operations in Abu Dhabi as “Balloon Adventures Emirates” offering hot air balloon expeditions into the heart of the emirate’s pristine desert.

Balloon Adventures Emirates says its a magic carpet ride’ expeditions give passengers a unique view of a landscape which takes in huge red sand dunes, the emerald green oases of Al Ain, the emirate’s second city and heritage capital, and the chance to spot Arabian gazelles and wandering camels in their natural habitat.

Beginning early in the morning – around 5.30am from pick up points in Abu Dhabi city – the expeditions launch from an area just north of Al Ain, about an hour’s drive from the UAE capital, and are fully approved by the country’s General Civil Aviation Authority and GHQ.

“Rising early for a sunrise flight is a minor inconvenience when compared to the breathtaking views and incredible desertscapes to be seen,” said Peter Kollar, Director, Balloon Adventures Emirates. “It is also the best time for flying as the cool and serene ambience adds to the experience.” The company operates a fleet of six balloons in Abu Dhabi and, in addition to its regular itinerary, which lasts around five hours, offers exclusive balloon charter and four-wheel-drive transfers. Its service will operate from the end of September to the end of May.

“This is another exciting addition to Abu Dhabi’s steadily expanding tourism offering and is a great fit with our target visitor profile,” said Ahmed Hussein, ADTA’s Deputy Director General. “We seek to attract people who wish to engage with the emirate and its people and get close to it and this offering fulfils this criteria.”