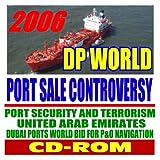 This unique electronic book on CD-ROM has an amazing collection of the finest federal documents and resources about the controversy surrounding the bid by DP World for ports operated by the P&O Steam Navigation Company.

The disc includes material about the Committee on Foreign Investments in the United States (CFIUS), Exon-Florio provisions, and associated U.S. Department of Treasury guidelines. “If there was any chance that this transaction would jeopardize the security of the United States, it would not go forward. The company has been cooperative with the United States government. The company will not manage port security. The security of our ports will continue to be managed by the Coast Guard and Customs. The company is from a country that has been cooperative in the war on terror, been an ally in the war on terror.

The company operates ports in different countries around the world, ports from which cargo has been sent to the United States on a regular basis.” – President George W. Bush, February 21, 2006. President Bush strongly supports the decision to move forward with the DP World transaction. The administration, as required by law, has reviewed the transaction to make certain that it does not in any way jeopardize national security. Under the process conducted by the Committee on Foreign Investment in the United States (CFIUS), officials carefully reviewed! the national security issues raised by the transaction and its effect on our national security.

Twelve Federal agencies and the government’s counterterrorism experts closely and carefully reviewed the transaction to make certain it posed no threat to national security. DP World has signed a letter of assurances making commitments to meet and maintain security standards for the port terminals that they will own and operate in the United States. There are a number of safeguards that are in place in the agreement, and the American people should feel confident that the transaction will in no way harm the security of the Nation’s ports.

DP World, a UAE-based commercial entity, is purchasing the U.S. subsidiary of the London-based P&O Steam Navigation Company. The announcement of DP World’s bid for P&O was made in November 2005, and the news was widely reported in the press and international financial trade publications. The formal CFIUS process was set into motion in December, and the Federal government conducted a thorough review to ensure that port security would in no way be compromised by the deal.

The President has made clear that he stands firmly behind the decision to allow the DP World transaction to move forward. Preventing this transaction by a reputable company to go forward after careful review would send a terrible signal to friends and allies that investments in the United States from certain parts of the world are not welcome. DHS, along with the U.S. Coast Guard, U.S. Customs and Border Protection, and other Federal agencies, sets the standards for port security and ensures that all port facility owners and operators comply with these standards.

DP World will not manage port security, nor will it own any ports. DP World would take on the functions now performed by the British firm P&O – basically the off- and on-loading of cargo. Employees will still have to be U.S. citizens or legal permanent residents. No private company currently manages any U.S. port. The United States has traditionally welcomed Foreign Direct Investment (FDI) and provided foreign investors fair, equitable and nondiscriminatory treatment with few limited exceptions designed to protect national security.