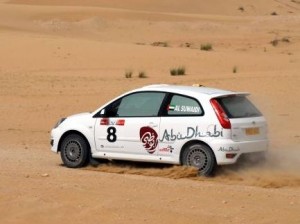 The proximity of Jordan to their home base makes this rally a priority for the five Team Abu Dhabi rally stars who fly the flag for Abu Dhabi’s expanding motorsport programme.

Meanwhile the BP Ford Abu Dhabi World Rally Team will be looking to maintain its current position at the top of the 2010 WRC Manufacturer’s Championship table in this third WRC round.

Hot off the tracks from his win at MERC event, Rally Kuwait, Team Abu Dhabi driver and former 2004 MERC Champion Sheikh Khaled Al Qassimi is hoping to emulate his success in Jordan. Al Qassimi’s original entry into Jordan Rally was in the WRC with his BP Ford Abu Dhabi team mates, but after impressive MERC performances that have him in joint leadership, he is now focusing on the 2010 Drivers’ Championship and building upon his status as the UAE’s most successful rally driver to date. 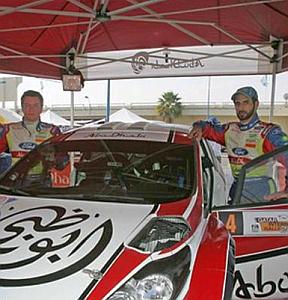 “My focal point for 2010 is now to challenge for the MERC title,” commented Al Qassimi. “My co-driver Michael and I won at Rally Kuwait, and led at Rally Qatar before punctures forced us to retire, and I feel that we are in a strong position to go for a win in Jordan. We have a busy schedule, including all the MERC rallies and nine rounds of the WRC, but it is all vital to my continuing development as a driver and providing Abu Dhabi with the results its support and investment deserve.” Abu Dhabi Tourism Authority (ADTA) backed World Rally Team, BP Ford Abu Dhabi is also looking for a championship win as it heads to the Middle East aiming to increase the lead on closest rivals Citron. Lead driver, Finland’s Mikko Hirvonen, last competed at Jordan Rally in 2008 to great success, claiming first place amid the desert sand dunes and dusty gravel tracks he excels on.

The rock-strewn stages are a challenge that Hirvonen is anxious to take on. “Jordan can be difficult, there are a lot of crests and hills and nothing to define the edge of the road. We will have to make sure that our distances after crests and corners are very precise,” he said.

Meanwhile, returning to the MERC for the first time since their February 2010 debut, the other four Team Abu Dhabi drivers, and members of the ADTA Junior Driver Development Programme, will join Al Qassimi on the familiar desert stages. The four up-and-coming Emirati rally stars will be giving their local fan base everything to cheer for as they attempt to excel across the testing hills and unmarked stages that typify rallying in the Middle East.

Jordan Rally is the closet that Al Qassimi and fellow Team Abu Dhabi drivers have to a home rally on the WRC circuit in 2010, but hopes are high that this will change in the future with the addition of an inaugural rally in Abu Dhabi, for which a candidate event – Rally Abu Dhabi – is being held towards the end of this year.