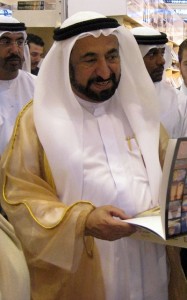 Abu Dhabi, 3rd March 2010 His Highness Dr. Sheikh Sultan bin Mohamed Al Qasimi, Member of the Supreme Council and Ruler of Sharjah, was honoured today by the Zayed Book Award as the Cultural Personality of the year 2010 in its fourth edition.

The Award honours prominent figures for their unique contributions to the advancement of the Arab culture, and for works that portray tolerance and promote peaceful coexistence.

The accolade was in recognition of His Highness’s generous contributions in promoting the Arabic culture and nourishing the Arabic Literature in the the Arab World. Throughout three decades, Sheikh Sultan has formulated the cultural scheme of the Emirate of Sharjah driven by the fundamental role of culture in the development of the community, and ordered the establishment of several cultural institutions in view of fulfilling his vision. The massive cultural projects in the Emirate of Sharjah support conservation of cultural heritage and active interaction with other cultures. In addition, His Highness has written several books in history, social sciences and humanities.

A galaxy of Sheikhs, Arab and foreign diplomats, intellectuals, writers, thinkers and artists were also present. 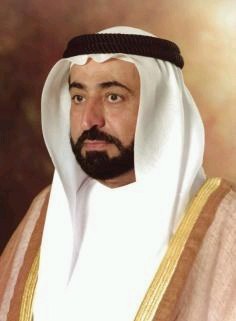 His most recent book, entitled “Sard Al That” سرد الذات, details the Sharjah Ruler’s life, from the 1940s to the 1970s. It documents historical events and provides information on major milestones in the emirate of Sharjah, the Persian Gulf and the Arab World including the spread of Arab nationalism, and the fast cultural and educational progress of the emirate. “In sharing my autobiography, I hope readers will get to relive my experiences vicariously, and know more about that historical period. The vast legacy of heritage and the people’s attachment to special landmarks like Sharjah Fort did not only help them define their personality but has given Sharjah a unique cultural identity,” remarked His Highness Dr. Sheikh Sultan on Sard Al That سرد الذات.

He has also written a book titled “The Myth of Arab Piracy in the Gulf” (1986) in which he argues that the East India Company was determined to increase its share of Persian Gulf trade by all possible means and principally by the accusation of piracy and the need to fight it. In his book, structured in five sections, the Persian Gulf in the eighteenth century, the accusations of ‘Piracy’ (1797-1806), the attack by the British on Rās al-Khaimah (1809), negotiations and treaty (1814) and the destruction of the Qawāsim (1819), Al-Qāssimī places emphasis on the machinations of Captain, rising to Brigadier General, John Malcolm envoy of the then Governor General of India 2nd Earl of Mornington and Captain David Seton the British Resident in Muscat and at one point discusses Malcolm’s proposal for a base in the Persian Gulf first raised in 1800 and then again in 1808. 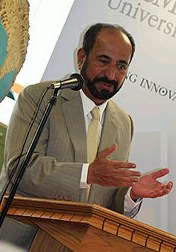 Al-Qāssimī states that Malcolm based his argument to his superiors not only on the necessity of a base for trade purposes but also as a defensive measure to protect India against European that is French plans.

For the Centenary of World Scouting, and the Golden Jubilee of UAE Scout Movement, HRH wrote the book “The Genesis of the Scout Movement in Sharjah”, been himself a dedicated Scout as so a regular sponsor of groups and different gatherings and activities, (i.e. the 2008 International Gathering of Scouting and Humanitarian Actions[1]. In this book, as a conclusion he said: “(…) To the leaders of all Scout movements worldwide, who have kept their promise, we say: “You are doing one of the noblest and influential jobs by providing constructive education to young people”.