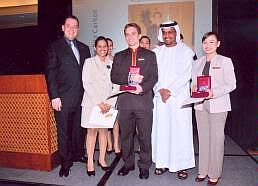 Dubai Department of Tourism and Commerce Marketing (DTCM) has announced the winners of the “Receptionist of the Year” award which is organized by DTCM in coordination with the Dubai chapter of Association of Front Office Managers and Assistant Managers.

Yefgini Strokov from Ritz- Carlton Dubai was adjudged the winner, while Ms. Josimar Devlin from Millennium Airport Hotel Dubai came in second. Ms. Dian Mendoza from Le Royal Meridien Beach Resort and Spa won the third place. Fourteen contestants from various five-star hotels in Dubai took part in the competition, and the winner will represent Dubai in the international finals to be held in January 2011 in New Zealand.

The competition was divided into two rounds – the first round was held on September 25th, during which the contestants were interviewed by the judging panel for 30 minutes each and asked several technical questions. At the end of this round, six competitors were shortlisted for the final round held on October 2nd. During the final round, the competitors were required to answer five questions and take part in role playing, simulating a real hospitality work situation. The performance of each competitor was graded by a judging panel and the final score was the sum of the performance grades given by each of the five judges.

The first place winner was awarded AED 10,000 and a Letter of Appreciation; in addition he will be fully sponsored to represent Dubai at the international competition of the David Campbell trophy hosted by New Zealand. The winner of the second place received AED 5,000 and the third place winner received AED 3,000. All the six shortlisted finalists received a Letter of Appreciation presented by Ibrahim Yaqoot and Steven Mueller.