Swivelling her hips and swaying her body to the oriental rhythm is Dareen who has a vivacious personality in addition to having a pretty face! A dazzling dancer, an eloquent choreographer and a renowned dance teacher, Dareen has come a long way from the time she was inspired by a dancer with a snake at her cousin’s wedding in Minsk. Possessing Greek blood but born in Belarus, Dareen has worked to Moscow and Cairo. “I loved dancing at a young age but it was only when I was 21 that I felt that I had a calling to take the dance limelight,” said Dareen, who is now domiciled in Dubai.

Wanting to be more close to belly dancing, known as oriental dance, she started her affair with the sensual dance form after she finished her secondary school in 2003. “I tried different kinds of art encompassing acting, dancing, and singing. I even studied at musical school where I learnt how to play the piano,” she said with a brilliant smile. 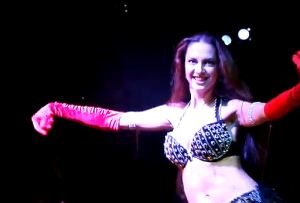 Performing in some Hindi movies and Arabic pop videos, she ensured that she made her mark in dancing by organising and choreographing her own Belly Dance Festival called ‘Jawhara’ last year. Just like Jawhara means jewel in Arabic, Dareen explains that she wanted to highlight that a woman is a like a shining jewel and Dareen reflects that not only in her dance but in her charming personality and friendly spirit.

Giving dance lessons, performing for various events and now having revived her belly dance band called DayraDance, Dareen has proved that belly dance is beneficial for a woman.

“My advice is that women should all dance and belly dance is a feminine dance that makes a woman confidence, graceful and makes her healthy,” she said. Dareen said that belly dancing was a kind of healing for any woman. “Many of my students have reported benefits after belly dancing such as pregnant women and even women with abdominal complications such as periods, fibroids and ovarian cysts,” she said.

Dareen said that you can tell a lot from a woman from the way she does a belly dance and one can pinpoint what physiological conditions and psychological feelings they have.

“I even create and design my own attire and use several props like fans, feathers and even lighted candles to make the dance more sensational and interesting,” said Dareen.

She has competed in several competitions around the world including the World Championships, the international festival “Assambleya”, Championship of “Liga professionals” and has won titles such as “Miss Bellydance 2006” and “Miss of Charm”. Dareen has travelled all over the world to five-star and six-star hotels including Oman, Qatar, Bahrain, Croatia, Sri-Lanka, India, Egypt and hopes to travel more to spread the joy of dance everywhere. She said, “Oriental dance is not my hobby or a job, it is a style of my life, a part of my soul, implementation of my dream.

“I believe Woman is a goddess and this dance helps her to feel it, to trust herself, to be powerful and self-confident”. So let’s do the goddess dance and be a goddess!