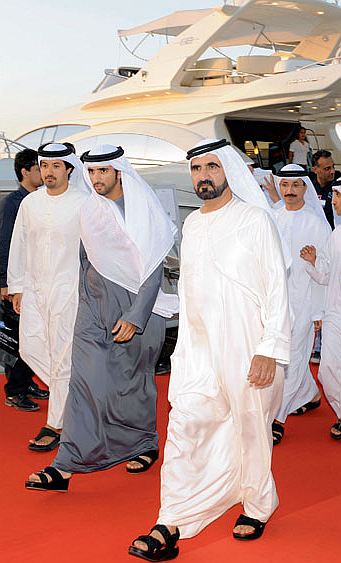 His Highness Shaikh Mohammed bin Rashid Al Maktoum, Vice-President and Prime Minister of the UAE and Ruler of Dubai, on Friday visited the Dubai International Boat Show 2011 at the Jumeirah Beach in Dubai.

Shaikh Mohammed officially launched ‘Ferry Dubai’, the latest water transport service offered by the Roads & Transport Authority (RTA). He was briefed by RTA Chairman Matar Mohammed Al Tayer about the ferry which, in the first stage, will serve Dubai Creek and the coastal line stretching along Jumeirah Beach, Dubai Marina and the waterfront developments.

The 32-metre-long ferry, which can travel at a maximum speed of 24 knots/hour, can carry 100 passengers and is fitted with modern entertainment facilities.

Al Tayer said the first stage will see two ferries serving a number of lines. They will be increased in later stages to 10 ferries.

Shaikh Mohammed said he was pleased with the achievements of the RTA and its efforts to provide quality services and infrastructure to the citizens, residents and visitors of Dubai.

He also praised the success of the boat show and the growing interest among local, regional and international players to take part in such an important event.

Present were Shaikh Ahmed bin Saeed Al Maktoum, Chairman of the Dubai Civil Aviation Authority and President of the Emirates airline, other Shaikhs and senior officials.