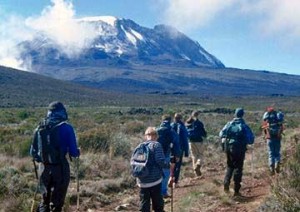 SHARJAH, March 14th, 2010: A group of volunteers from the UAE led by Sheikh Mohammed Abdullah Al-Thani have reached the summit of Mount Kilimanjaro, Africa’s highest mountain and the tallest free-standing mountain in the world, in support of an international campaign to fight Malaria and other contagious diseases.

The group pledged to raise awareness on the diseases by struggling their way up to the high summit.

Malaria is the leading cause of death for children in Tanzania. Worldwide, a child dies every 30 seconds. An estimated 20 per cent of the world’s population mostly those living in the world’s poorest countries is at risk of contracting malaria. Malaria causes more than three hundred million acute illnesses and kills at least one million people every year. Ninety per cent of deaths due to malaria occur in Africa, south of the Sahara, and most deaths occur in children under the age of five, according to the World Health Organization (WHO)