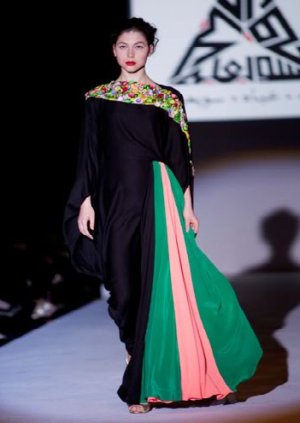 Abaya has always been an identification of Middle East. The Abaya design has remained pretty much unchanged for centuries, but a group of new designers in the United Arab Emirates are now giving the traditional Islamic dress a modern-day makeover.

The esigners are experimenting with bold colours, materials like lace and leather, and even add sequins, embroidery and daring slits to jazz up the often considered more like a uniform black robe.

Reem and Hind Beljafla began their abaya design business, DAS Collection Dubai, two years ago after realising the market for high-end design for Muslim women in Dubai was woefully underserved.

It [abaya] is not a tent that covers us all – we can still look pretty and elegant and sexy Badr al-Budoor, designer
The young sisters say that as long as a woman’s form is still covered by the abaya, there is no harm in having a bit of fun with the design.

“It never loses its identity – the target is to cover the woman’s body so there is no harm in playing with the fabrics,” says 24-year-old Reem. 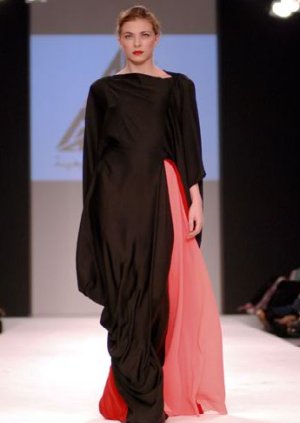 “We thought why can’t we take our abayas and make something to suit the modern girl, but still keep that conservative style.”

The Beljafla sisters have come under fire for some of their pieces, especially ones which are made from transparent fabric, or show off the shoulders.

Photo: Abaya Couture But they insist their more racy designs are only supposed to be worn to ladies-only gatherings such as wedding parties.

They also say that an evening-wear abaya is not supposed to be worn for a trip to the mall during the daytime – much as one wouldn’t wear a cocktail dress to the office.

The sisters have big ambitions.

They have already met famous US designers like Vera Wang, and believe the day is not far off that Western models will be seen sashaying down a catwalk in Paris or New York wearing one of their creations. 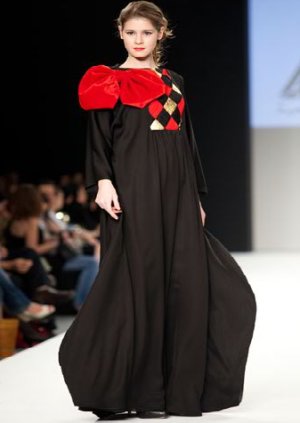 Badr al-Budoor is another Emirati designer who is having fun transforming the age-old abaya by adding frills, polka dot print and giant bows to give her pieces a princess-like feel.

Interest in her unusual designs is so high that she is taking her business online to target an international audience.

Rabia Z now runs a fashion empire
She also hopes that, as she opens up to the overseas market, people might view traditional Islamic dress in a different light.

“The whole point of doing this online is to spread the word on the abaya and show people that it is a fashionable piece that we wear,” says Ms Budoor, who recently launched her website AbayaCouture.com.

“It is not a tent that covers us all. We can still look pretty and elegant and sexy – just as covered and as traditional as we need to be.”

Ms Budoor does not see a contradiction in creating “sexy” abayas.

“The definition of sexy here in Emirati society is very different to the West,” she says.

“Sexy to us means elegant, modest and feminine. It’s possible to look attractive without showing any skin at all.”

It is not just Islamic dress that is being transformed.

Emirati designers have also started to take Western-style clothes like T-shirts, skirts and trousers and adapt them for Muslim customers.

Rabia Z, designer
Rabia Z began designing when she started wearing the hijab, or a headscarf, a few years ago while living in the US.

“I realised there was nothing stylish for women like me to wear – something that is conservative but still stylish and fashionable,” says Rabia, who is now one of the region’s most successful designers.

“It was shocking that no-one seemed to care about us – there was absolutely nothing that catered to the needs of Muslim women.”

Rabia started her business eight years ago and now runs a veritable fashion empire catering for everything from haute-couture to high street.

She plays with both fabric and cut to achieve her design mantra of “modern yet modest”, and even stitches hijabs into hooded tracksuit tops so that women can exercise in comfort.

But Rabia does not only want to dress Arab women, and is targeting Muslims right across the world, including in the West and further afield.

She already has plans to tap Asian markets like China and Korea, as well as countries closer to home like Iran and Afghanistan.

“The potential for further growth is massive,” she says confidently.

“It’s still untapped, it’s a niche market and the potential is just enormous.”