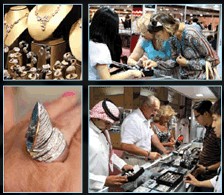 According to the market report published by the organizers investment demand was the strongest performing segment during the second quarter of this year, posting a rise of 118 per cent to 534.4 tonnes compared to 245.4 tonnes in Q2 2009, according to World Gold Council.

“We are expecting strong demand for gold this season with 2010 consumption looking to surpass levels to reach a five-year high as gold is the world’s strongest tangible investment,” said Mr Saif Mohammed Al Midfa, Director-General of Expo Centre Sharjah, ahead of the Mideast Watch and Jewellery Show.

Gold sales at the MidEast Watch and Jewellery Show will be seen as an indicator for the entire sector since the fair is held ahead of the festival season that begins with the Indian festival of Diwali, which is followed by Christmas and New Year.

“We are expecting the MidEast Watch and Jewellery Show to provide further boost to the buying season in the region. Sales have started picking up during Eid Al Fitr, and the ensuing festive season will enhance the demand further. The show is perfectly timed to benefit from this festive buying season,” said Mr Midfa.