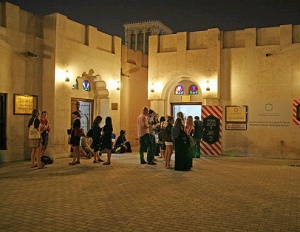 Sharjah, 21st Feb. 2010 In line with USESCO’s International Mother Language day Sharjah Museums Department (SMD) celebrated the Arabic Language Day on Feb. 21 .The move was to promote linguistic and cultural diversity and multilingualism. The initiative is part of SMD’s commitment to highlight the importance of the Arabic language in the community, and to maintain national heritage, history and identity.

In celebration of the Arabic Language Day, Sharjah Calligraphy Museum hosted artist Khalifa Al Sheimi who gave a lecture on the types of calligraphy and tools used. The museum also organized an exhibition called “Calligraphy as an art” where tools used in calligraphy were on display. Al Eslah School Museum also displayed some of the writing tools used in the past in the United Arab Emirates.

“Celebrating the Arabic Language Day confirms our commitment to respect and further promote our mother tongue, which is a symbol of national identity and belonging. The Arabic language with its distinguished linguistics holds the strength to promote nation-building and strengthening cultural ties,” said Manal Ataya, Director General, SMD. “Arabic is also the language of the Holy Qu’ran, the basis of our unity, and the mirror of our present and future,” she added.

Al Eslah School Museum was established in 1935 as the first formal educational institute to be opened in Sharjah. The mission of the Al Eslah School Museum is to enable the generations of the past and of the present to meet and to maintain Emirati customs and traditions regarding the Arabic language, religion and Islamic education.

The Sharjah Calligraphy Museum, the only museum in the Arab world devoted entirely to calligraphy, aims to instill the art of calligraphy in the people and visitors of Sharjah and to set new standards both locally and internationally.

Created by local artists and well-known international calligraphers, significant works of art from the Arab world demonstrate the complexity of this vibrant art form and its historical and Islamic foundations. Arabic calligraphy seen on canvas, wood, paper and ceramics will inspire visitors with its positive and living energy.

The Sharjah Museums Department, established in 2006 by His Highness Dr. Sheikh Sultan Bin Mohammed Al Qasimi, Member of Supreme Council and Ruler of Sharjah, aims to promote the emirate’s rich legacy of arts, heritage and culture.